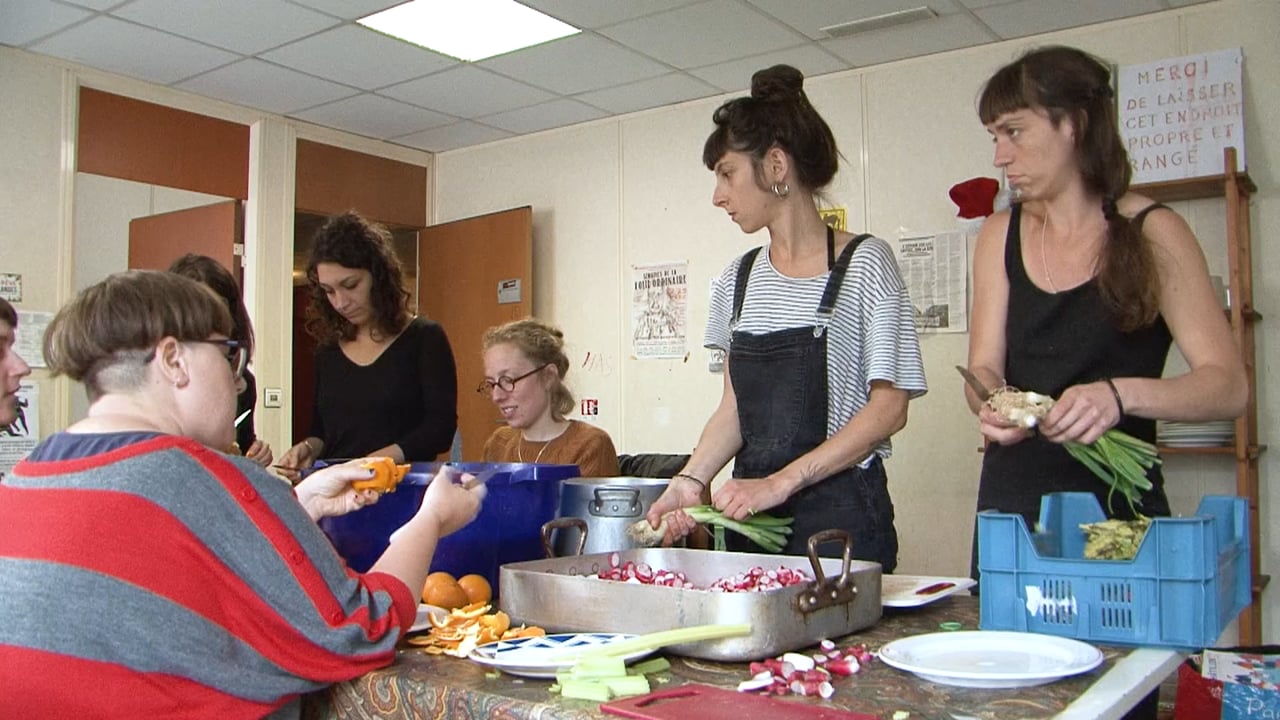 Political Geographies, Social Geographies
A film exploring the different experiences of life for the 50 residents of a squatted former bank in the Parisian suburb of Ivry-sur-Seine. The film focues on the functioning of the space, and the resident's experiments with a utopian way of life, away from from capitalistic logics and police surveillance.

The genesis of this research is to highlight an alternative way of living in the cities: squatting abandoned buildings and self-managing its organisation to open it to its neighbourhood as a social centre.
The occupation makes the space no longer public nor private, and allows not to undergo the laws of the rents and organise every kind of social activities.
The idea of the film is not to come out with a definition of these places and their modus operandi, but to spread the possibilities permitted by the occupation of such abandoned spaces, which are always more common in modern cities.
Political life is organised in the social centre according to the self-management of those who frequents it, so the film also aspires to question the horizontal organisation of this utopian experiment.

My research on squatted autonomous spaces began 2 years before the shooting of the documentary. An earlier study study portrayed the functioning of theses alternatives spaces through the writings of Geographers and philosophers such as Hakim Bey, Henri Lefebvre and Paul Chatertton. I then started to present my project to the general assembly several times until they collectively accepted it, with some important conditions about its making, like presenting the project to everyone in the room I would shoot and getting their agreement to be filmed.

Shooting a documentary as a piece of research brings you to conclusions above the film himself, because you meet the people you study in a deeper way. I realised how difficult it was to exercise autonomy and anti-authoritarian struggle in a place with different ways to see the world, some very young kids and an eviction order looming. Self-managing a space takes so much time in discussions in general assemblies, even more with the language barrier that requires interpreters to participate. After the writing of my Geography thesis on the same theme, I see video as a tool to create a new point of view that theoretical research lacks. Filming allows you to present evidence through the practical application of the words and theories and spread it better.
The making of this documentary was not an easy path. The anarchist movement entertains a suspicion against every camera, which comes from a long media coverage history. Moreover, I was shooting an anti-institutional place for my university courses; which brings to some ethical issue I had raised in my previous works: how can I establish a personal work for my academical and professional interest while benefiting from the self-managing and volunteer work of the people that made this place?
I gained the confidence of the social centre by coming very often to meet everyone and showing my previous work on Italian's anarchist places. Making this documentary held a political dimension to me which was going above my studies and the university exercise, that I could have manage easier by choosing not such a complex subject, if my priority had been getting a good-looking successful movie and a nice mark.

Review 1. The Filmmakers method and content are cohesive – both adopt non-authoritarian voice. Empathetic camera and editing.
Review 2 Captures slices of everyday life and activities of a squat. You really get a feel for the conditions and the different personalities that live there.