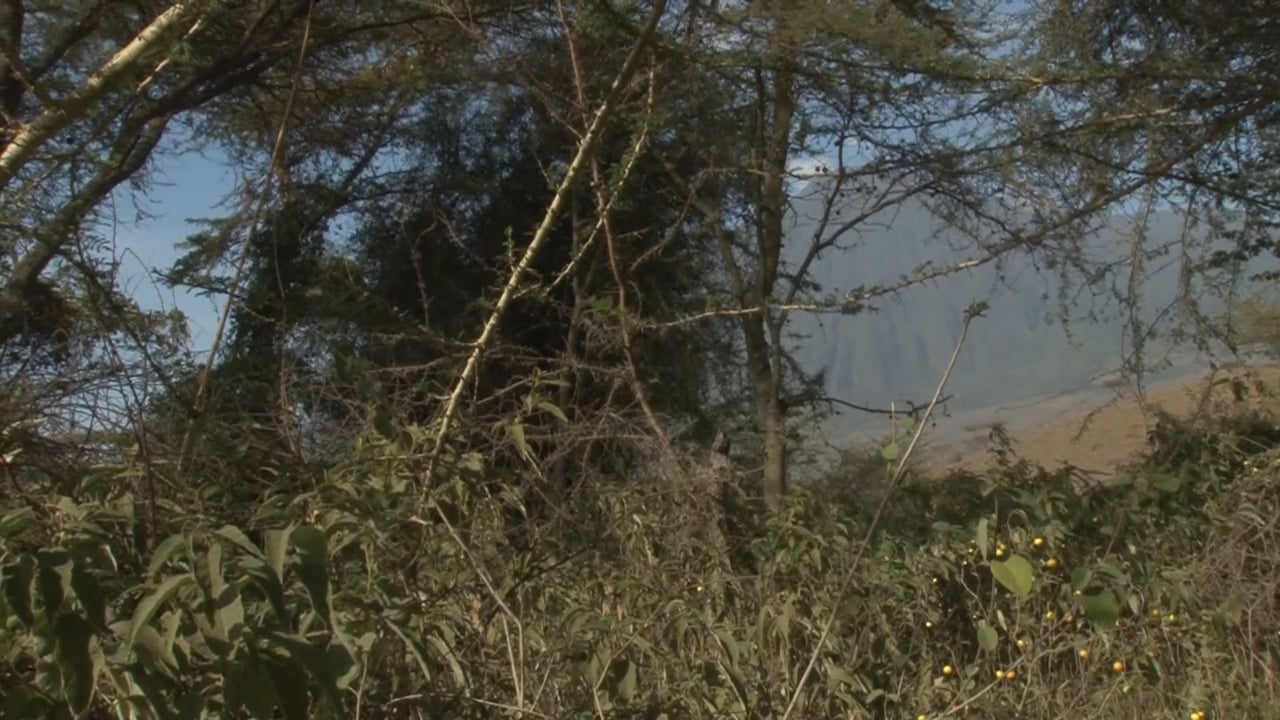 Due to climate change, the lands in the rain shadow of Tanzanian volcano Meru are increasingly affected by drought. Young Maasai Paulo must find creative ways to feed his first son, who just learned to walk. As his goats lack milk, even for their own babies, he sets out into the dust every morning in search of breakfast. This film aims to explore the interspecies relationality and more-than-human entanglements involved, moving towards a multisensual, multilingual and multispecies ways of knowing. It also sets out to illustrate the agencies and co-becomings of geological formations, Spirit, fauna and flora through an audiovisual geopoetics of Maasailand.

The research work that is underlying this film is still a project in progress, and concerns how different ways of knowing -of different peoples, different species and more-than-human agents- can contribute to academic knowledge making. This is part of a larger effort to make the voices of more people and even non-human others heard, and do research with them instead of on them. It is geared towards the decolonization of knowledge in academia, in which Indigenous ways of knowing are not seen as data, but engaged with as part of the theoretical conversation, thus responding to calls for cognitive justice, and extending this even across the species divide.

The essentialized dualism of nature versus culture is a relatively recent, specific Northern notion (Descola, 2013; Mullin, 2002), and climate change and the Anthropocene confront us with the idea that it becomes increasingly difficult to keep separating the two (Dibley, 2012; Latour, 2017). As a wide variety of Indigenous peoples perceive and experience human and non-human animal worlds as interactive and indivisible (Ingold, 1994; Rival, 1993), their understandings of personhood, agency and the more-than-human fundamentally challenge Northern notions. These have implications for understandings of knowledge and how to do research, opening avenues to develop more dynamic, relational and multivocal approaches.
However, the underlying core Cartesian dichotomy of nature/culture has been difficult to deconstruct, because it forms ‘the key foundation of modernist epistemology’ (Descola & Pálsson, 1996, p. 12). To access the ‘entirely different intellectual landscape, one in which states and substances are replaced by processes and relations’ (Ibid.), often audiovisual recording of data and dissemination of results is much more effective. It appeals to more multisensual, multivocal, contextual and dynamic ways of knowing that broaden and move beyond the mind-centered and often restrictive logic of exclusively verbal communication and information.

Selected Reviews
The film presents the idea that everything co-exists a chain of relation and dependence.

The film is beautifully shot and unfolds at a slow but natural-feeling pace. It closes with a sense of intimacy, which makes it worth watching besides the landscape and animals. It could be interesting to open discussion about watching/observing individuals in their daily routine. Are we othering? Do we watch with exoticizing eyes?

Captures the stillness and peace of the location and the man’s struggle to feed his goats. Interesting audio mix seems to focus on certain sounds, eg cow bells.