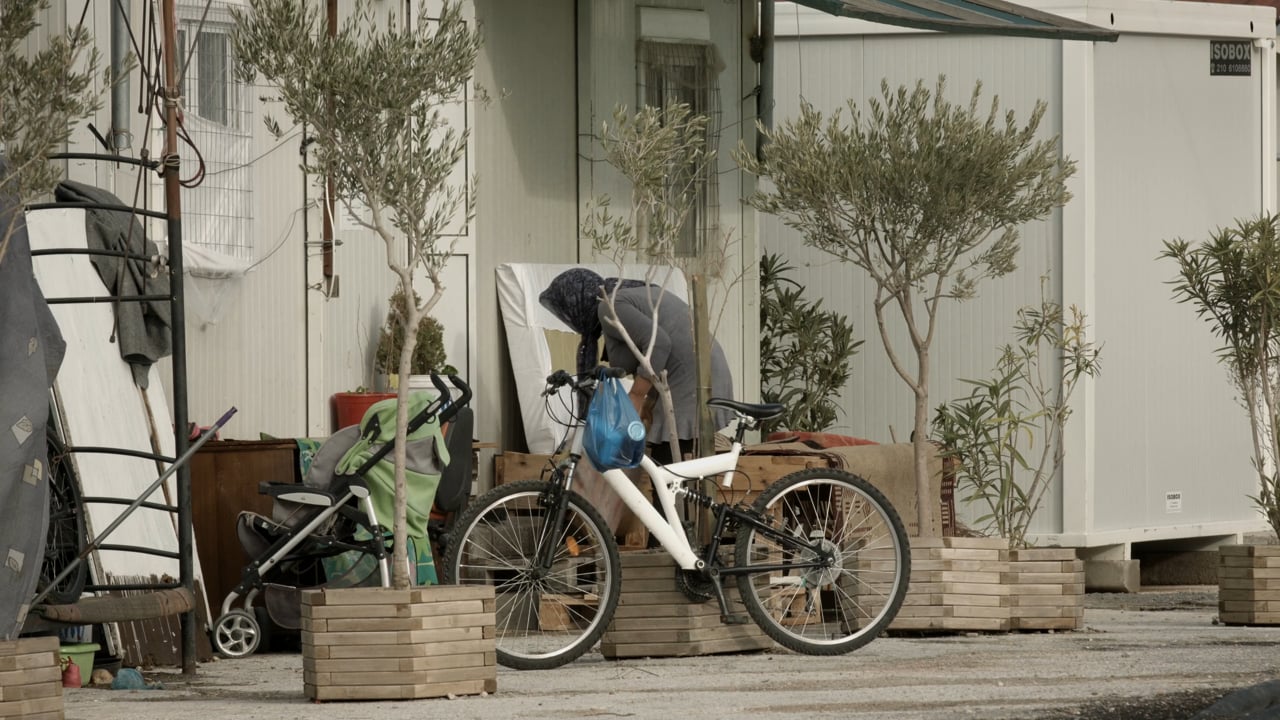 In the Eleonas refugee camp, Athens, the homogenous corridors formed by the rows of white prefabricated trailers become passages of narrative transcendence, evoking memories of a journey, earlier migrations and exclusion. I aimed to weave scenes of everyday life in the camp, refugee testimony, archive footage, historical and literary accounts into an abstract but polyphonic tale of migration, so the film could be personal and ubiquitous at the same time.

Eleonas refugee camp, set up in 2015, is a refugee camp in Athens, which has been a crucial transitional point in the recent refugee movement from the Middle East into the rest of Europe. This research was initially motivated by the chronically scarce documentation and under-representation of migrant/ refugee life in the area of Eleonas. The aim was to conduct a place-based, visual-anthropological study of refugee experience in the camp (2017), and to foreground earlier migrations that have taken place in Eleonas (1920s, 1980s-2000s). While filming in the camp I became intensely aware of its actual layout, and I decided that the above aims should be pursued, more narrowly, with focus on the camp’s spatial attributes. The objective was therefore to test and evaluate specific methods of filming and editing that would utilise the spatial qualities of the camp, so as to simultaneously incorporate its present image, testimony and historical record.
During filming, a specific cinematography was employed for all the ‘passages’: still camera, below-eye level, centred-frame shots, 18mm lens. Technical variation was kept to a minimum, in order to:

– Depict the passages in a manner which makes highlights their homogeneity and the strictly planned symmetries of the settlement.
– Showcase the existing variations, owed to the human element, such as signs of inhabitation (shoes, baggies, crates, leftover items, etc.), and human behaviours and interactions.
– Draw attention to the spatial hierarchy of the settlement, which begins with the main thoroughfares, continues with the narrower corridors / ‘back streets’ and ends with the personal element: adjustments and interruptions.
During editing, the non-’passage’ shots were used for filmic observation only, whereas the passage shots carried other, non-filmic narratives (in the form of subtitles): Refugee testimony, historical testimony, and literary excerpts.
Filming using narration and/or non-synchronised sounds) informed the production of knowledge and offered an opportunity to expand the narrative beyond the closed system of the refugee camp.

Review Beautiful observational film with a wonderful cinematography using wide shots. This is a good example when sometimes less is more, leaving space for the spectator to dive into each shot.