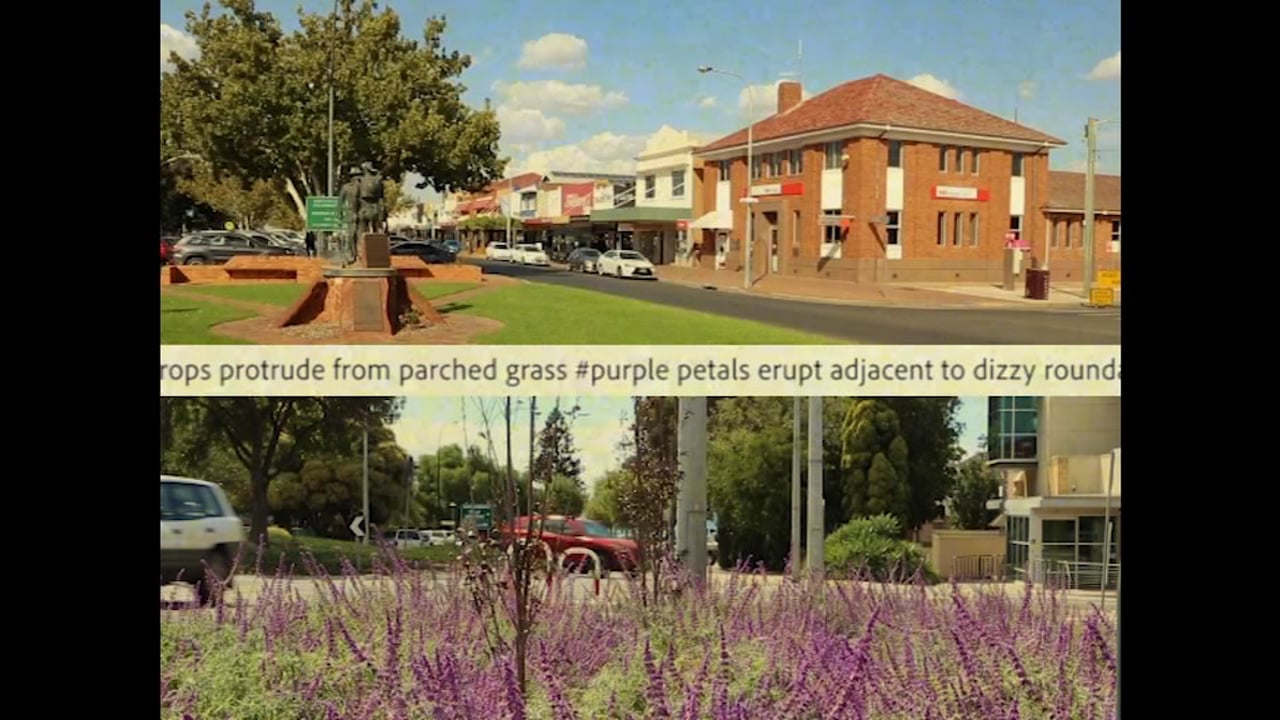 In 2019, we collected ‘B-roll’ footage from three locations in regional Australia during the first year of a three-year research project. During 2020, due to border closures, we were unable to return to complete filming but instead decided to make this short video. Inspired by Linda Lappin’s Soul of Place, we tweet to the landscape. Lappin suggests that in tweeting to landscape, writers should '[l]ook for the beautiful, sublime, picturesque, strange, or comic. Strive for the haiku effect' (p. 43). By combining this with panoramic images, we foreground what would have otherwise been the background while gesturing towards the posthuman.

This film was made as part of a three-year project called Engaging Youth in Regional Australia, funded by the Australian Research Council. It was initially planned as a collaborative film-making project that would involve regional youth during 2020. In the first year of the project we travelled to these areas and took preliminary B-roll footage for potential use in the film-making stage of the project which was planned for the following year. Due to border closures in Australia, we were unable to return to these areas and complete the film. Having only B-roll footage presented a challenge as to whether it was possible to make a short video that foregrounded what we had originally intended would only form the background of what would be a human-centred production.

We approached the making of the film from a posthuman perspective - one in which the human and non-human are entangled and not separate from one another. Each location in the study is heavily invested in primary production in Australia and so human intervention in the landscape as well as the ability of the landscape to resist these interventions are both evident. We decided aesthetically to use panoramic footage and include a 'text crawl' with a minimal amount of writing that might prompt a posthuman 'reading' of the landscape. Linda Lappin's book, The Soul of Place, provided inspiration for the text as tweets. We reference this with the use of hashtags.

We are both creative geographers and have worked in various performative ways in past projects. Candice, especially, has experience in video editing and production but she has never before used B-roll footage in this way. There were many practice-based insights that we gained from being originally immersed in landscape to re-visiting that footage and then responding to it that are difficult to put into words. However, foregrounding the landscape and responding to it in an experimental way resonated with some of the more traditional, qualitative interviews that were conducted with participants as part of the wider project. In particular, the affective and material dimensions of regional youth engagement, whereby young people appreciate and treasure the natural environments in which they live, was something that we more keenly appreciated.

Selected Reviews
There is no sound as this is originally designed as an installation. There is a rendering of disjointed (posthuman) landscapes: urban environment with transportation, and physical landforms. Accompanied by texts. Could be a useful teaching tool if background is included when shown to students.